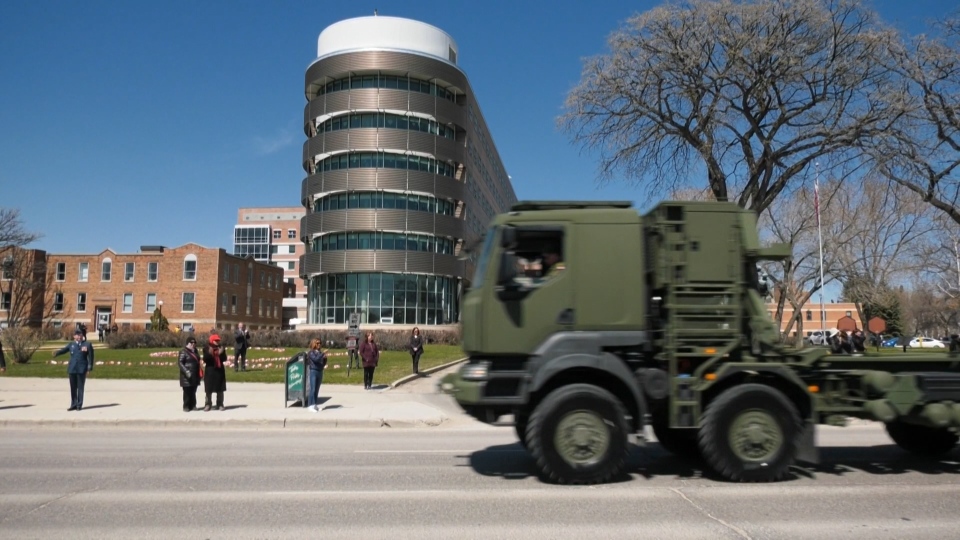 ‘Remember the fallen’: celebrating the 75th anniversary of VE Day

This year is the 75th anniversary of VE Day, which marked the official end of the Second World War in Europe.

In Winnipeg, local military personnel paid a visit to Deer Lodge Centre, driving their vehicles past the building. Normally, there would be a ceremony to mark the anniversary, but with physical distancing rules in effect, the soldiers came up with an alternative.

“It is an extremely important, once-in-a-lifetime day today for our veteran population,” said Kevin Scott, chief operating officer of Deer Lodge Centre. “Many of the individuals who we serve who were veterans of the Second World War were young adults at the time, who were going overseas to help liberate other countries.”

Colonel Eric Charron, Base Commander of CFB Winnipeg and 17 Wing, said they had planned for a service at Brookside Cemetery before the COVID-19 pandemic occurred, and limits of gathering sizes were announced.

He added it was still important to hold the parade and mark the anniversary for the residents of Deer Lodge.

“Knowing that these veterans came back from World War Two, where over 45,000 fellow Canadian soldiers did not,” he said. “So, that moment had to be marked. They live on, and they live on with those memories, so we are there. We carry the torch for them. We’re there to remember the fallen, and remember the living.”

Scott adds he has been to ceremonies where governments of European countries, such as The Netherlands and France, have honoured Canadian veterans for their role in the Second World War.

“It’s important for all of us to not let this day go by without showing some level of recognition of it,” he said.

Deer Lodge Centre houses and treats veterans in care in Manitoba. Scott said there are approximately 50 veterans living at the centre, some who had served in the Second World War.

Alsip’s Building Products and Services is unlike other businesses. For more than a century, Alsip’s has been helping the people of Western Canada build – homes, businesses and community venues.